So You Think you can Synthesize?

Macquarie University has once again entered a team of undergraduate students to compete in the International Genetically Engineered Machine (iGEM) synthetic biology competition. Over the last four years, our teams have won 3 silver and 1 bronze medals. This year our team is hoping to win a gold medal, though they do have one handicap- I will be coming along with them as a team advisor to the iGEM Giant Jamboree in Boston.

This year as an outreach activity, our iGEM team has created an online reality contest "So You Think You can Synthesize" where you can ask our student team any burning question you have about synthetic biology through a live chat feed and can vote for your favourite scientist. Looks like we are down to the last four scientific contestants now! You can also find videos about each of the eliminated contestants and about our team's experiences in iGEM here.

There is no I in team, but there is one in Ian

On Friday, I took the labgroup out for a team building exercise, and nothing builds team spirit like shooting each other with lasers! So we went out and played lasertag and ten-pin bowling.
So what did we learn from this outing-
- running around like a maniac with a laser is a good workout, my muscles still ache 3 days later
- being a sneaky sniper does not work as a lasertag strategy- after I was shot by Liam five times in the first 30 seconds or so, I realised running around like a kitten on ritalin is a much more effective strategy
- you definitely want Silas on your team in any sporting activity, he kicked ass in both bowling and lasertag
- it was good to finish up with pool and darts as it gave me the opportunity to win back some respect on the pool table

Deepa Varkey is a PhD student in my group working on how marine cyanobacteria adapt to different temperatures. She has just won a prize for the best poster at the 9th European Workshop on the Molecular Biology of Cyanobacteria in the Netherlands. Great job Deepa!

Last night, I was at the Eureka Awards Dinner. The Eureka Awards have been described as the Australian Science equivalent of the Oscars. While not quite as glamorous as the Oscars, it was nevertheless a black tie event at the Sydney Town Hall, and we did have some media celebrities present, such as Adam Spencer and Dr Karl Kruszelnicki. It was also the second top hottest topic on Twitter yesterday in Australia.

I was not nominated for an Award, but was there to fly the flag for Macquarie University. I was very excited that MQ's Professor Lesley Hughes won the Eureka Prize in the category of Promoting Understanding of Australian Science Research for her tireless efforts in communicating the science of climate change. Congratulations to Lesley and to all of the award winners of the 2014 Eureka Prizes. The full list of the 2014 Eureka Prize results can be found here.

Martin has beaten me to it and already put up a blog post about the Indigo V expedition and our paper in PLoS Biology. I just have a couple of things to add. Martin and Federico were interviewed on ABC radio on Wednesday morning, here is a link for anyone who wants to listen or read the transcript. I like Martin's line- "Every second breath we take the oxygen is being produced by microbes in the ocean.

Also, I wanted to highlight the beautiful photo from the Indigo V expedition, taken by Rachel Lauro, which is the cover image for the current issue of PLoS Biology: 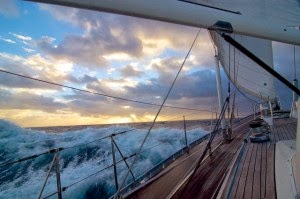 For marine microbiologists getting out into the blue ocean is a big deal. Competition for ship time is fierce and we often propose and plan research voyages years in advance. Even with access to dedicated research vessels the ocean is enormous, and vast swaths of the ocean are rarely visited by scientists and therefore poorly sampled.

To attempt to address this problem I set off on a expedition onboard an 18m sailing yacht in April last year to help prove the concept that citizen scientists onboard sailing vessels can fill the gaps in oceanographic data collection. Together with Federico Lauro, Joe Grzymski and Rachelle Lauro we set off from Cape Town into the Indian Ocean on our way to Mauritius.

The first leg of the Indigo V voyage was far from plain sailing. We encountered foul weather, gear failures, lack of sleep, sea sickness and survived the ravages of a fierce gale and cruel waves 1000s of kilometres from land. Fighting to stay on course, stay onboard and remain afloat were our main priorities. However, we also managed to take measurements and preserve samples for microbial oceanography using relatively simple low cost equipment. We survived and proved that CITIZEN SCIENCE IS POSSIBLE.

The lessons we learned form this expedition form the basis of our community page headlining this weeks PLOS Biology.**


The timing of this article coincides with the arrival of Australia's new research vessel. These are exciting times for microbiologists in Australia, particularly for biological oceanographers who have been anxiously waiting the RV Investigator which has been delayed for a year. Investigator was built in Singapore and arrived yesterday in her home port of Hobart where she will be fitted out with some impressive scientific kit.

This newspaper article provides some background and interesting numbers. For example, Investigator will be able to accommodate up to 40 scientists and students on voyages from the equator to the Antarctic ice edge for up to 300 days per year. Scientists requested over 800 days of research project time on board for the first year of operation, but the vessel will be funded for only 180 days at the moment.

If you are a student and have an interest in exploring the blue ocean and the organisms that thrive within it then you should get in contact with our research group here at Macquarie University. We have a number of exciting PhD studentships opening early next year for work on metabolic modelling and genomics of marine microorganisms.

**(This is actually the second paper produced from this project, the first was a review of the links between biogeography and traits of marine microbes, that we mostly wrote while prepping the Indigo V for the first leg in Cape Town.)


Posted by Martin Ostrowski at 15:05 No comments: